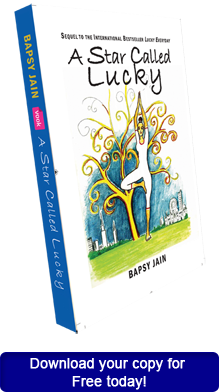 Take a sneak peak into the book
with this trailer 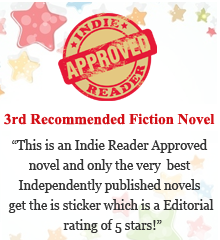 Jain’s characters do a lot of musing about life, death, and morality as Lucky decides to do what she must to warn Lobsang in this simplistic novel. 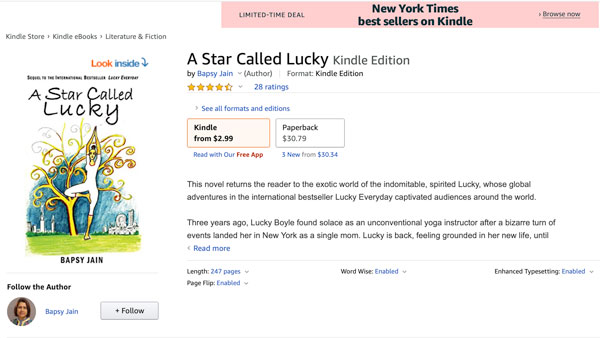 Three years ago, Lucky Boyle found solace as an eccentric yoga instructor after a unexpected cross-continent move and divorce to land in New York as a single mom in the international bestseller Lucky Everyday. Now, Lucky is challenged once again by a twist of fate in Bapsy Jain’s newest novel A Star Called Lucky.

A Star Called Lucky returns the reader to the exotic world of the indomitable, spirited Lucky Boyle, whose life falls into a tailspin from the moment she is accosted by a duo of unsavory strangers on the New York subway. The encounter marks the beginning of a day of surprises as the sudden appearance of a powerful bureaucrat and a fleeting encounter with a mysterious Buddhist monk forces her into the secret and dangerous world of corrupt politics.

Reluctantly, she takes on a bizarre assignment to track a renowned but elusive Tibetan doctor, and begins another voyage across continents. Events unravel at whirlwind pace as Lucky struggles to unravel the web tying her to a dangerous secret. Her safety rests in the uncertain hands of a computer savant and in her ability to trust her own intuition as she examines the delicate balance between love and life in this exciting sequel.


Written in a concise, engaging style, A STAR CALLED LUCKY is the pulse-pounding sequel to Jain's LUCKY EVERYDAY. Lucky is a strong, funny, and nuanced lead protagonist, and her reflections on the world and people around her are fascinating.
A STAR CALLED LUCKY is an unusually thoughtful and relatable work in a genre not known for intelligent, textured female protagonists.

5 Indie Titles to Fuel Your Wanderlust


"Novelists can be agents of social change"