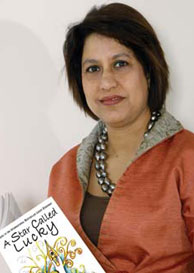 BAPSY JAIN is a best-selling mystery author, wife, educator and entrepreneur noted for the international success of her debut novel, Lucky Everyday, published by Penguin in 2009. A Star Called Lucky is the sequel novel to her best selling debut and returns the reader to the exotic world of the spirited Lucky, whose new adventures are sure to captivate audiences around the world. Originally from Calcutta, India, Bapsy attended the Sydenham College of Commerce and Economics in Mumbai. After graduating, she left for the UK to qualify as a Member of the Institute of Chartered Accountant England and Wales.

A forced bed rest compelled Jain to pick up the pen and begin her writing career.She worked for ten years on her debut novel, The Blind Pilgrim published by Penguin. "My fascination with Eastern wisdom being put to the test in a fast-paced Western setting led to the creation of Lucky, whose life intersects both worlds,"says Jain.

After The Blind Pilgrim became a bestseller in India, Penguin acquired rights to the book in 2009 and subsequently published the book worldwide under a new title Lucky Everyday.The success of Lucky Everyday, coupled with persistent requests for a follow-up, compelled her to continue the story with an exciting sequel in A Star Called Lucky.

Currently, Jain is working on a third novel titled Night Vision. Her writing shows spiritual leaders, yoga practitioners and readers worldwide, a new way of looking at the everyday. She delivers an inspiring reminder that love, anguish and spirituality have a place in both turbulent and peaceful times.

Originally from Calcutta, India, Bapsy attended the Sydenham College of Commerce and Economics in Mumbai. After graduating, she left for the UK to further pursue her education in finance.

"I am not a writer,"she says. "I'm a thinker who is compelled to write. I have been very fortunate in life, but it doesn't mean that I don't think about people who aren't. I worry about people. I care about their difficulties. I write by thinking, and I grow by writing."

Bapsy is a member of The Institute of Chartered Accountants (England and Wales) and serves on the Board of Trustees for many international charitable organizations. Her passion for business and education led Bapsy and her husband to establish the SP Jain Center of Global Management with branches in Dubai, Singapore and Sydney.

A Star Called Lucky is Jain's newest novel and the sequel to her best selling debut Lucky Everyday. In this second novel, Lucky's life is interrupted when she is accosted by a duo of unsavory strangers on the New York subway. Her day continues to bring surprises: the sudden appearance of a powerful bureaucrat and a fleeting encounter with a serene, young Buddhist monk.

Can she beat the odds this time and find the way back to her life as it once was? This novel returns the reader to the exotic world of the indomitable, spirited Lucky, whose global adventures in the international bestseller Lucky Everyday captivated audiences around the world.

A crowd of adults stands by the gap in the hedge.

One of them carries a small bundle in his arms. On his right side, two thin legs flop like a broken gull’s wing. On his left side, cradled like a football, is Varun’s head. From the hedge comes a loud thwack and a shout, more of anger and relief than triumph. A moment later a groundskeeper swings the body of a cobra over his head and cracks it again, like a whip. The snake is dead, but so, too, will be the boy.

Only once as an adult would Lucky discuss it - with Shanti, her friend.

“Well,” Shanti said, after Lucky told her the story, “the snake must have been there for a reason. Maybe they had an appointment.”

“Varun and the snake. Stop judging everything, Lucky. Things happen for a reason, and the universe doesn’t owe us explanations. Varun was being a boy and the snake was being a snake. It’s what we do. We follow our inherent nature. The real question is, why have you carried around the blame for all these years?”

“Let it go. It happened. It wasn’t like the universe went out and did something TO you. Or to Varun, either, for that matter. Things happen. Sometimes we are just in the wrong place at the wrong time. If you have no deliberate fault, then take no deliberate blame.”

Lucky Everyday concerns itself with the human spirit's ability to adjust to the challenges that life throws our way. Named a bestseller by Penguin Books, this highly descriptive version of East meets West takes readers on an introspective journey following the life of Lucky Boyce as she transitions from being a professional working in New York to becoming the wife of a wealthy Indian businessman and then on to leading the life of a divorced teacher of yoga.

Author Jain Bapsy is already working on a 3rd novel for readers to follow the adventures of Lucky Boyce. It is set in the future in a more modern world and tells the story of Lucky and her son, Sean, who must navigate through an Orwellian government under control by constant computer surveillance.

Sean is faced with overcoming skepticism about his mother's curious Eastern ways to confront looming societal questions: What have we done? Why are we here? and, ultimately, Who am I? Like Lucky Every Day, and A Star Called Lucky, this novel is populated with fascinating characters and unfolds a gripping, twisting plot that will keep the reader turning pages, even as weightier questions about life and society are brought to the forefront. Will Sean quest to understand his roots and find his father be fulfilled? What will be the future of the loveable Lucky Boyce?