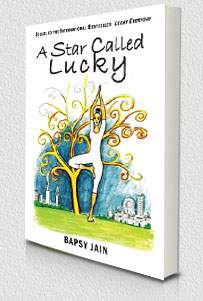 Special love to my late parents Dina and Manek Medhora and my husband, Nitish, sons, Sammy and Gaurav, and my dear father-in‐law, Dr. Shashi, and mother-in-law, Neera Jain. My sister, Ava Suntoke, and Priya Phadnis, who have worked patiently on editing this novel.

All my family and friends who have encouraged me through my many years of writing. My publisher and marketing team led by Ms. Mira Zikovich.

This novel is a sequel to the international bestseller Lucky Everyday. www.luckyeveryday.net

Lucky’s life is interrupted when she is accosted by a duo of unsavory strangers on the New York subway. Her day continues to bring surprises: the sudden appearance of a powerful bureaucrat and a fleeting encounter with a serene, young Buddhist monk.

Reluctantly she takes on a bizarre assignment to track a renowned but elusive Tibetan doctor, unknowingly immersing herself in strange and dangerous situations across continents. Events unravel at whirlwind pace as Lucky struggles to piece together the connections and defend herself against blackmail that could bring her jail time in the very prison she teaches yoga.

Her safety rests in the unlikely hands of a misunderstood loner, her teenage neighbor who hangs out with distant online friends. Lucky invokes the wise words of Shanti to summon her balance.

Can she beat the odds this time and find the way back to her life as it once was? This novel returns the reader to the exotic world of the indomitable, spirited Lucky, whose global adventures in the international bestseller Lucky Everyday captivated audiences around the world.

No words passed between father and son.
“You must shoot to kill,” he said at last. “A clean shot causes no pain.”
“Steady,” the father said but it was too late.
The father stood up and surveyed the scene. “He’s throat shot,” he said. “You’ll have to track him down and finish the job.”
“But it’s cold,” the boy said.
“And that buck suffers because of you.”
“He’ll die soon.”
“Maybe, maybe not. Either way, you can’t leave him in pain. You have to finish the job…………………..”

His step-father, a strapping, die-hard cowboy wannabe in jeans, a checkered shirt, a white Stetson hat, and black, alligator skin, Tony Lama boots, had never been proud of his smaller step-son-the boy who favored his mother’s slight build and fair complexion. There was an older step-brother playing linebacker at Idaho, and two younger half-brothers already taller and heavier than this boy, but what he lacked in brawn he had made up in brain-even the father had to admit this-and so, reluctantly, on the boy’s mother’s insistence, the father drove the boy to Seattle, with all the fragile and necessary equipment loaded into the back of a 1977 Ford F-150 pickup. They had looked so shabby on arrival that the parking lot attendants first directed them to the rear of the building, the place where the hired help clocked in. But no, the boy insisted, he was here by invitation, the winner of the Montana State Science Fair.

He was not just going to win - he was going to RULE.

The boy and his father turned together and walked into the building and across the cavernous hall to the table and the display and the overhead projector - and there they stopped. The corn kernels-the showcase of the boy’s display - glowed a dull, infected pink. The boy stared at the display. It was ruined. All of it.Fusarium moniliforme. He knew all thirteen common corn fungi by sight. But how? A suspicion dawned. He checked the display until he found the point of attack. Someone - some where - some how - had punctured the seals with a syringe and injected a contaminant. The work was sabotaged. It did not matter that the infection was not the one the seeds had been immunized against. The viewers and the judges would see only the moldy seed of a failed experiment.

For a long time the boy stared at the roof of the Kingdome. Eventually, his stepfather laid a hand across the boy’s shoulder and said, “Politics, boy. That’s where the money is. Let’s go home.”

Chris Redfield (the protagonist of the first Resident Evil video game) takes a shotgun and blows off the head of a deranged farmer advancing on him with a pitchfork. Chris feels nothing. He is on a mission to rescue the Alpha team. They have been kidnapped by the followers of Los Illuminados, the ‘enlightened’ ones who control the world by means of a mind-controlling parasitic infection. Inside the mansion halls, a mob advances on Chris, and he fires again and again and again. The zombies fall in droves. Chris is on a roll, but time is running out. If Chris cannot rescue them, they will all die, as they are infected with the disease.

The teenage girl is looking over Chris’s shoulder. Figuratively speaking. She is also stabbing at the controls that make Chris aim, shoot, and dodge. The girl is obsessed with this.
A computer junkie? She hunches her shoulders and draws closer to the screen.

The look on the nurse’s face says more than the nurse’s stammered, “Another one.”
“This makes five this week,” the doctor says. His tone is matter-of-fact. He sighs. “Fetch me some ice and we’ll see what we can do.” A new strain of Influenza. No hospital in the world can save this man. In another place, the doctor would roll the man over onto his side and try to drain the heavy green fluid from the man’s lungs, but it is too viscous - too sticky to flow. The man is suffocating. It would not even help to insert a tube into the lungs. They’ve tried that, too, but the thick fluid won’t be drawn out. The doctor looks at the wife. He knows that if he does not save her husband, she will become a widow doomed to a life of hell on earth, along with her children. His eyes brim with tears.

While the nurse is gone, he reaches inside his shirt and produces a tiny vial carried on a black thread. The vial is almost empty. It is light in his palm. He pries loose the stopper and cradles the man’s head in his arms, and shielded from sight, tips some small bits onto the man’s bloated tongue followed with a little water. “Try to swallow,” he whispers. Then he recites a Buddhist mantra to ensure the mushroom bits administered will heal.

The man, delirious, rasps a sound that may or may not be a reply.
“Just try,” the doctor says. He strokes the man’s wet hair. “Just try.”

A crowd of adults stands by the gap in the hedge.

One of them carries a small bundle in his arms. On his right side, two thin legs flop like a broken gull’s wing. On his left side, cradled like a football, is Varun’s head. From the hedge comes a loud thwack and a shout, more of anger and relief than triumph. A moment later a groundskeeper swings the body of a cobra over his head and cracks it again, like a whip. The snake is dead, but so, too, will be the boy.

Only once as an adult would Lucky discuss it-with Shanti, her friend.

“Well,” Shanti said, after Lucky told her the story, “the snake must have been there for a reason. Maybe they had an appointment.”

“Varun and the snake. Stop judging everything, Lucky. Things happen for a reason, and the universe doesn’t owe us explanations. Varun was being a boy and the snake was being a snake. It’s what we do. We follow our inherent nature. The real question is, why have you carried around the blame for all these years?”

“Let it go. It happened. It wasn’t like the universe went out and did something to you or to Varun, either, for that matter. Things happen. Sometimes we are just in the wrong place at the wrong time. If you have no deliberate fault, then take no deliberate blame.”